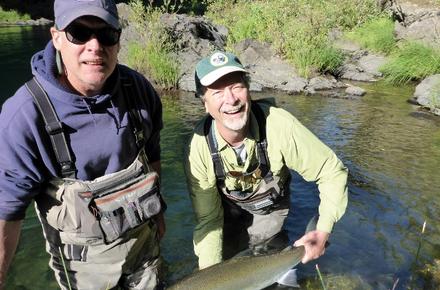 ​Tony Wratney grew up in Piedmont California, a small town in the San Francisco bay area. He first came to the North Umpqua on a family vacation in 1967, and fell in love with the river. His family made the river trip an annual event from there on out.

Then one fateful morning in 1977, Tony hooked his first steelhead. He went straight back to Steamboat Inn and asked Jim Van Loan for a Summer job. Jim informed him that he was too young to work in Oregon but should send him a letter when he turned 16. So Tony wrote that letter and started working at Steamboat Inn the Summer of 1979. He continued to work the Summers at Steamboat until 1981 when he moved to Bend to go to college. Then in 1984 Pat Lee from Steamboat Inn asked him if he would like to do some guiding on the river, and he jumped at the chance. Tony worked out of the Inn with the help and guidance of Pat Lee and Jim and Sharon Van Loan until 1994 when he formed Summer Run Guide Service. Summer Run Guide Service is the longest running guide service in the fly water. This year Tony celebrates his 32nd year guiding the North Umpqua fly water and continues to be the only permitted guide who lives on and fishes the North Umpqua 12 months a year.  After all these years he still has a love for the river and guiding seldom seen in the guiding industry.